Another beautiful day in Rochester (re: windy with chance of sun, rain, or snow), and I was running errands, including stopping at the local card store to pick up some cards for a trade. (I've been bad at trading cards I no longer have because I didn't remember trading them previously!) Someone walks in with a 800-card box of Heritage that he sells to the owner for $20. I look through it, realize that there is probably 25 short prints, a relic, inserts, some blue-borders, and hundred of base, and offer the owner $30 for it. A quick 50% profit for him, and he doesn't have to catalog it!

Flush with my success, I grab a few packs from the opened Heritage box on the shelf. I open the first one to find a purple refractor in it. 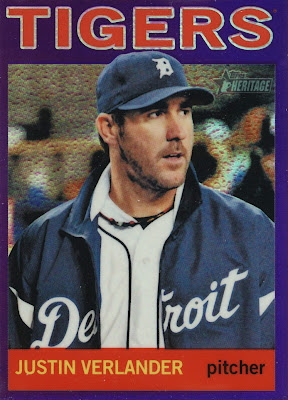 "What the heck?" "Oh, Mike opened one last week, and there was a purple refractor in every pack." I open another pack and, yep, there is another one. A quick check on ebay confirms that these are selling well. Maybe I'll get a Trout, or a Harper of these. So I decide to open all the packs left just to get the purple refractors. I get through 17 or 18 of the 21 packs left, and this is what I find: 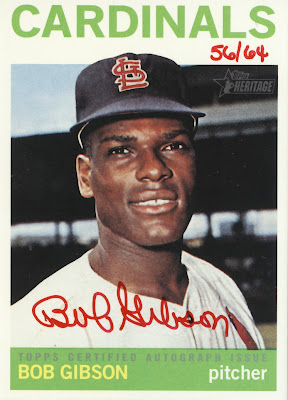 I'm so excited, I'm almost shaking. If I didn't love this year's Heritage set enough before now, I REALLY LOVE IT now!

But now I have a dilemma: I can keep this for my PC, or I can sell it to recoup some of the cost of all the cards I've bought recently, which is too much. Complicating matters is the fact that I have a Gibson from my 1999 Fleer Sports Illustrated Greats of the Game autograph set, which I put together a few years ago. But I love this autograph. My son is trying to finagle me out of it, too!

I go home to catalog and organize all the new Heritage I have, and in the mail are the wrapper redemption packs from Topps for Series 1. Blue Sparkle. I wonder why they call it that? Two packages. Three packs. I open the one that came by itself in the bubble mailer, and what do I find: 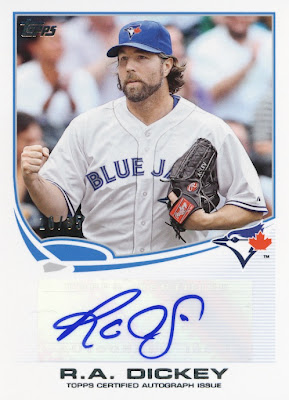 Yessirree Bob! Another hit! An R.A. Dickey wrapper redemption blue sparkle auto (which, by the way, is neither sparkly nor blue, unless you consider that he is a Blue Jay).

"Hey, I better go play the lottery today," I think to myself.

That is where the luck runs out. I barely even got two numbers on the entire slip! Oh, well, as the song goes, "Two out of three ain't bad!"
Posted by Dan at 12:57 PM

I saw someone else pull purple Heritage refractors in every pack the other day. But you went one better with the Gibson auto.

Wow, awesome day! Well, if I were you, I'd consider selling a lot of those purple refractors and possibly the Dickey as well. Dickey's autographs are at a premium now, and it's probably the best time to sell his stuff. I wouldn't wanna lose that Gibson if I pulled it, so maybe you can dodge it and still recoup?

Sweet success.. I am in Rochester as well , what store is it you speak of? Not many around here.